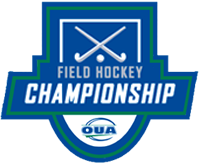 TORONTO – The Guelph Gryphons lost their grasp on the OUA women’s field hockey championship title Sunday as they suffered a 3-0 loss to the Toronto Varsity Blues in the gold-medal game at the U of T’s Back Campus Fields.

The Gryphs had been the defending champions as they’d defeated Toronto at Varsity Field for the 2019 championship. There was no 2020 season due to the pandemic.

The Varsity Blues scored once in each of the first three quarters in a game they dominated.

Toronto outshot the Gryphs 14-3, including a 9-1 advantage in the first half. Of those total shots, Toronto had 10 on target while the Gryphs had two.

The Varsity Blues also took nine of the 12 penalty corners awarded in the game.

Sam McCrory hit for the eventual game-winning 3:50 into the contest while Molly Koop tallied in the second quarter and Katie Lynes added the third-quarter goal.

Lauren Marcolini took all three shots by the Gryphs in the game.

The title win is Toronto’s first since 2016 and its 33rd overall since the formation of the league in 1971. The Gryphs have won it five times with the first one coming in 2007. The York Lions have won it nine times and Waterloo Warriors three times.

Toronto and Guelph had finished atop their respective divisions, the Varsity Blues going 7-0-2 in the three-team East and the Gryphs going 5-2-2 in the four-team West. Both gained their berths in the league final by winning their division finals a week earlier.

Toronto advances to host the best-of-three U SPORTS championship series. They’re to host the Canada West champion Victoria Vikes in the series next weekend. Games at the Back Campus Fields are to go Friday at 6 p.m., Saturday at 3 p.m. and, if necessary, Sunday at 3 p.m.

Victoria had been ranked No. 1 in last week’s national top five rankings while Toronto was second and Guelph third.