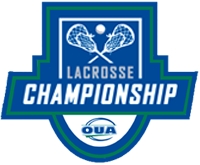 The Gryphs survived to play on the second day of the two-day tournament by being the team with the best for-and-against goal differential of the three second-place teams following Saturday’s round-robin pool play.

Guelph split its round-robin games at Oshawa’s Civic Fields, losing 12-5 to the Trent Excalibur and surprising the Laurier Golden Hawks 9-7.

The Gryphs have suffered eight consecutive losses to Trent, including four in Oshawa. They last defeated the Excalibur 12-11 in the seventh-place game in the 2014 championship tournament.

Saturday’s win over Laurier broke a streak of 13 consecutive losses to the Golden Hawks including 14-4 and 9-7 defeats in this year’s regular season.

Western Mustangs went 2-0 in Pool A while the host Ontario Tech Ridgebacks were 1-1 and the McMaster Marauders were 0-2.

Queen’s Gaels were 2-0 in Pool B while the Toronto Varsity Blues were 1-1 and the Brock Badgers were 0-2.

Sunday at Ontario Tech’s Vaso’s Field, the Gryphs were dumped 22-1 by Queen’s in the semifinals for their ninth consecutive loss to Queen’s.

Trent defeated Western 13-5 in the other semifinal.

The Mustangs continued their dominance of the Gryphs in the bronze-medal match as Western won 9-6 to stretch their streak to 26 consecutive victories over Guelph from the 2007 season on. The Mustangs led 3-1 at the end of the first quarter, 5-2 at halftime and 8-5 after the third quarter.

Emma Tobin, Jade Barko and Megan Latoski each had two goals for Guelph in the medal game.

Gryphon goalkeeper Shayla Larson was their player of the game in all four of their matches.

Trent won the league title by edging Queen’s 10-9 in final.