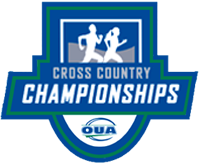 LONDON – The Guelph Gryphons swept the team titles at the OUA cross-country championships at the Thames Valley Golf Club Saturday for the first time since 2015.

With their five scoring runners finishing in the top 10, the Gryphs finished with 32 points in the men’s race, two ahead of the runner-up McMaster Marauders and 68 better than the bronze medal-winning Western Mustangs.

2019 individual men’s champion Mitchell Ubene of the Gryphs placed second this year with a time of 24:48 for the eight-kilometre race. He finished seven seconds behind McMaster’s Andrew Davies while Max Turek of McMaster was third in 24:57.

Kyle Madden of the Gryphs was 15th in 25:47, a second ahead of teammate Adam Schmidt.

Guelph was dominating in the women’s race as their five scoring runners finished in the top seven.

The Gryphs finished with 19 points while Western was second at 60 and McMaster third at 73.

Kiana Gibson of the Gryphs grabbed the overall individual title as she completed the eight kilometres in 29:40 while teammate Olivia Roussel was second in 29:47. Erin Mawhinney of McMaster was third in 29:49.

Other Gryphs to score were Sadie-Jane Hickson in fourth at 29:58, Annika Ariano fifth in 30:04 and Nina Whitford seventh in 30:19.