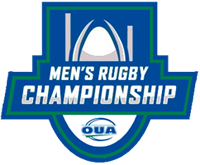 KINGSTON – The Guelph Gryphons got to hoist the Turner Trophy in victory for the first time since 2016 Saturday as they defeated the Queen’s Gaels 37-28 in the OUA men’s rugby championship.

Two tries in the final five minutes of the opening half that they dominated in terms of possession sparked the Gryphs to the title win. Guelph also took advantage of several Queen’s penalties and the Gaels failing to find touch on their kicks.

Those two tries gave the locals a 22-7 lead at halftime.

The OUA championship win was the fourth for the Gryphs as they previously won it in 1974, 1998 and 2016. It was the eighth consecutive time Guelph played in the final and the seventh straight year the Gryphs and Gaels met to decide league honours.

After yielding the first try of Saturday’s game at Nixon Field, home field for the Gaels, the Gryphs surged ahead and were never headed again.

Queen’s opened the scoring in the 14th minute when their captain, flanker Will Matthews, scooped up a bouncing ball after a teammate’s hit on a Gryph created an errant toss and scampered 30 yards untouched right between the goal posts for the try. Santiago Guadarrama Maya added the convert.

The Gryphs pulled even three minutes later. After trying to pound it over the line on the right side of the field, they quickly swung it to the left side where fourth-year wing Alex Williamson deked a defender before touching the ball down. Left-footed Colin Lynch curved the convert through the uprights.

Williamson added his second try of the game in the 26th minute after the Gryphs worked the ball from a line-out on the right side of the field all the way across to the left side for Williamson’s try.

The Gryphs pounded in another try in the 36th minute following a line-out on the left side of the field with Evan Raymond getting the score.

Tyler Casey added the final try of the opening half on the final play of the half as the Gryphs pushed their way into the endzone following another line-out.

Williamson dove into the endzone on the far left side in the 17th minute of the second half for his third try of the game, the Gaels down a man at the time due to a yellow card. They had been down two a minute or two earlier. The try pushed Guelph’s lead to 32-7.

Queen’s started a comeback attempt when Neil Traynor barged between the posts and into the endzone with a try with about 11 minutes to play. Guadarrama Maya converted.

After a lengthy goalline stand by the Gryphons, the Gaels finally punched the ball over with Stefan Zuliani getting the try with seven minutes to go. Guadarrama Maya added another convert.

The championship win avenged Guelph’s only defeat of the entire season, a 33-12 loss to the Gaels in preseason play Sept. 18 at Varsity Field.

Next up for both the Gryphs and Gaels will be the fourth Canadian University Men’s Rugby Championship tournament at Nixon Field Nov. 24 to 28.

The Gryphs have played in the previous three national championships. They were seventh in 2019 in Montreal, fifth in 2018 at Victoria, B.C., and fourth in 2017 in Guelph at Alumni Stadium.