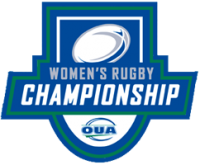 KINGSTON – A few hours after the Guelph Gryphons celebrated their OUA men’s rugby championship win at Nixon Field on the Queen’s University campus, the Gryphon women got to do the same.

The Gryphs regained their title as OUA women’s rugby champs Saturday with a 32-23 victory over the host Queen’s Gaels in the gold-medal match.

As was the case in the men’s final, Queen’s opened the scoring in the women’s championship game.

The Gryphs battled back to go up 15-13 by halftime, then yielded the first try of the second half before taking control.

The meeting was the third of the season between the two teams with Queen’s winning the previous two, both at Guelph’s Varsity Field, as they prevailed 17-13 in a preseason match Sept. 19 and 31-3 in league play Oct. 9.

The Gaels opened the scoring nine minutes into the match on a penalty kick by Amelia Stapley.

Hoffman started the scoring for the Gryphs with a try in the 13th minute, the very first try scored against the Gaels after the preseason this year, but Queen’s got it back on a try by Jaden Walker seven minutes later. Stapley kicked the convert.

Stapley came back to add another penalty kick in the 28th minute.

Hoffman came back for her second try of the game with seven minutes until the halftime intermission after the Gryphs were given possession around five yards out following a Queen’s penalty.

The Gryphs grabbed their first lead of the game a minute and a half later when Hannah Beaumont broke free for a long run to touch the ball down in the Queen’s endzone.

Maggie Banks connected for a try for the Gaels on a long run in the fifth minute of the second half.

However, the Gryphs replied two minutes later with the go-ahead try as Amara Cavadias dove in for a try and Kendra Cousineau kicked the convert.

Guelph extended its lead when Aliesha Lewis found some room down the right side near the sidelines after a couple of missed tackles to take it in for a try in the game’s 63rd minute.

Maddie Gundy completed the scoring for the Gryphs as she barged in for a try with about 12 minutes to go.

Riley Rewakoski of the Gaels finished the game’s scoring about seven minutes later when she touched the ball down in the Guelph endzone.

Both teams are to be back at Nixon Field this week for the U Sports national university championship tournament. It’s to go Wednesday through Sunday.