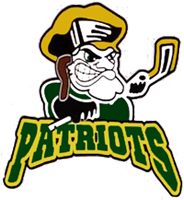 Patriots pull away in second in doubling of Hanover

HANOVER – The Mount Forest Patriots netted all three goals scored in the second period on their way to an 8-4 doubling of the Hanover Barons in Provincial Junior Hockey League play Friday night at Hanover’s P and H Centre.

The Patriots outshot Hanover 53-32 and went 2-for-7 on their power play while the Barons were scoreless on three power plays.

Mason Kameka made 28 saves for the win in net for the Patriots while Brendon Landry had 45 saves for Hanover.

The game was the third consecutive match against Hanover for Mount Forest. The teams had split the first two matches.

The Patriots are to host the fourth-place Kincardine Bulldogs (19-13-0-3) Saturday at 8 p.m. at the Mount Forest and District Sports Complex. Game time is 8 p.m.